Payas, Suhana to return home with bronze from the Worlds 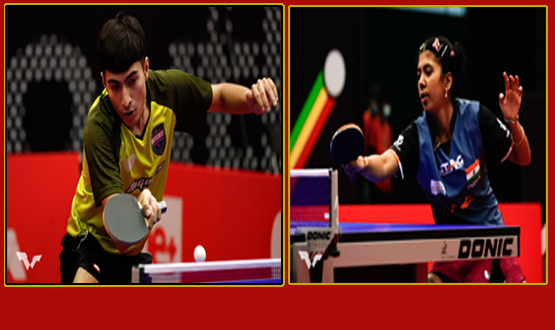 New Delhi, December 8: Payas Jain, following the footsteps of Suhana Saini, ensured himself at bronze at least in the Youth Under-19 Boys when he beat Iran’s Naved Shams in the ITTF World Youth Championships at Vila Nova de Gaia, Portugal, last night.

The reigning world champion, who executes the forehand and backhand shots with equal felicity, on song against the Indian as Payas failed to come to terms with his opponent’s onslaughts. Except perhaps in the second where Payas managed to seize the moment to win the game on extended points, Peng was all over with his attacking shots.

The last two games he won exemplified the complete control he had. It only added to the pressure on Payas and he could not come out of the cocoon built around him by the Chinese onslaught.

Both Payas and Naved have met each other before on half a dozen occasions. With yesterday’s win, Payas has equalled the win-loss records.

Payas was right on the money against the Iranian, breezing through to a 3-0 lead in the quarterfinals. However, Naved came back strong in the next to pull one down. Yet, Payas was up to the task in the fifth and completed it to romp home winners.

Earlier on Tuesday, Suhana Saini achieved the rare feat of becoming the only Indian to win three medals from the Worlds.

Suhana, however, had to remain contented with the bronze after going down to the top-seeded Egyptian Hana Goda 1-4 (10-12, 11-9, 3-11, 3-11, 8-11) in the semifinals on Wednesday. In the opening game, Suhana managed to deuce but her Egyptian opponent took the vital two points to go 1-0 up. In the second, however, the Indian took a six-point lead at one time to return to form.

But in the third, Hana benefited from Suhana’s blemishes to build her lead, taking seven consecutive points. There was no respite in the fourth as Hana went from strength to strength to take an unassailable lead, forcing an inevitable win in the next.