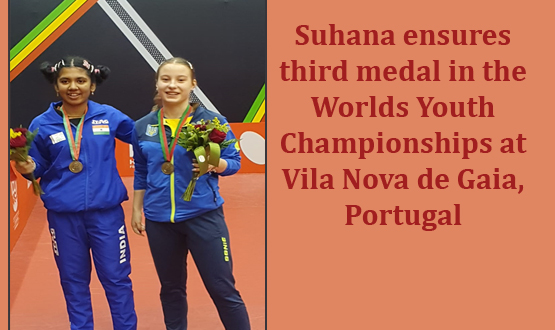 The Haryana girl, who is World No. 3 at present, becomes the only Indian to have won three medals at the Worlds across sections.

Suhana led the Under-15 Girls to a team bronze and then followed it up with another bronze in the Girls Doubles, paring with Ukraine’s Veronika Matiunina. The pair lost in the semifinals to the Egyptin-Japanese pair of Hana Goda and Miwa Harimoto 0-3 (6-11, 9-11, 3-11) last week.

But the win was by no stretch of the imagination came her way on a platter. The 14-year-old student from Rohtak’s Scholars Rosary Senior Secondary School had to earn every point, despite leading 3-1. She lost the opening game, yet she was adept at pushing her Romanian rival into the deep end of the court with crispy forehands.

Inching her way through in the quarters, Suhana seemed to relax a bit after the 3-1 lead enabling Bianca to claw her way back, shifting gears to level the score. In the decider, however, Suhana came to herself and sealed her opponent’s fate to sail into the semifinals, to be played tomorrow.

Thus, she also ensured at least a bronze medal, the third from the Portugal Worlds. The task in the semis against top-seeded Egyptian Hana Goda will not be easy. But one can expect the Indian to put her best foot forward, even in the worst of situations.

World No. 1 Payas Jain is slated to take on Iran’s Navid Shams in the quarterfinals later tonight.