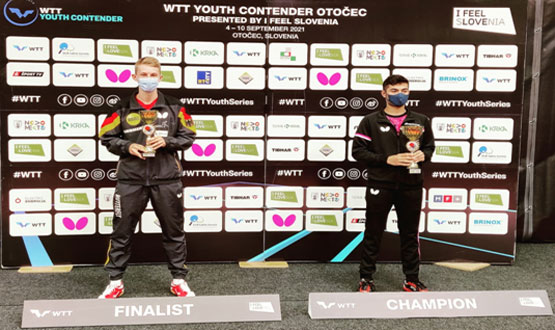 New Delhi: Payas Jain, the reigning National Junior Boys and Youth Boys champion, made most of what was his first competition in six months to claim the Under-17 Boys singles crown in the WTT Youth Contender event in Otocec, Slovenia, on Sunday night.

As the scoreline indicates, it was a tough final in which the Indian trailed 0-2 before picking up from where he left off in the semi-final against Vladislav Makarov of Russia. Jain, who was in a similar position, defeated the Russian 9-11, 7-11, 11-9, 11-9, 12-10 in a penultimate-round match that lasted nearly 51 minutes.  However, in comparison, he took a little over 39 minutes to complete the task against the German to make his first international outing counted.

Resuming from the quarter-finals stage, Jain showed tremendous spirit to recover a 1-2 deficit to beat Romania’s Andrei Teodor Istrate 3-2 (11-8, 8-11, 2-11, 11-9, 14-12). But he reserved the best for the last two outings—pulling off fine wins over Makarov and Schweiger for a dramatic turnaround in fortunes.

Playing for the first time in Slovenia, Jain found the trip profitable as he later settled with a bronze medal in the Under-19 Boys singles when Romanian Istrate Andrei Teodor avenged his U-17 quarterfinal loss, with 11-8, 11-5, 9-11, 11-9 win over the Indian.

“This tournament was important because we have had no competition after the Nationals (at Indore) in March. I am playing in Slovenia for the first time, and going through the qualifying stages was a nice experience. Overall, it turned out to be a nice outing and I enjoyed it thoroughly,” said Jain.