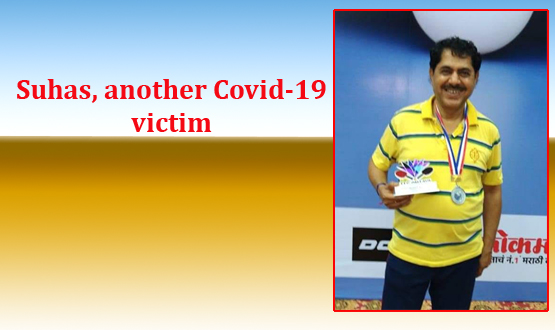 New Delhi: Covid-19 has snatched away another life from the table tennis fraternity. The 68-year-old former India player, Suhas Kulkarni, became a casualty of the disease when he breathed his last at a Thane hospital after failing to respond to the treatment on Sunday. He was 68 and is by his mother, wife, and daughter.

Suhas, who has represented the country in many international tournaments, had kept himself busy with the sport through coaching and playing in the Masters’ Nationals, besides competing at the international level.

He was a regular at the Veterans Nationals—now the Masters—and had turned out for Maharashtra at the Sonepat Nationals, his last appearance. In the previous Nationals held at Indore in 2019, he won the 65+ category singles crown.

Coming as he did from a family that had devoted itself to table tennis, Suhas was the brother of Nandini, who had represented India international tournaments. His elder brother Satish and younger Jayant, too, had turned out for India with reasonable successes.

One-time associate and Maharashtra teammate, Kamlesh Mehta, described Suhas as a one-of-a-kind player. “He (Suhas) was my senior, and along with and Atul Parekh, nurtured youngsters like me. Suhas always encouraged and instilled the right values. I learned a lot from Suhas and Atul, as their understudy,” said the eight-time national champion, extolling the virtues of the diseased.

Dilip Sampath, then secretary of the Maharashtra State Table Tennis Association, persuaded Suhas to leave his hometown Pune and settle down in Mumbai. Suhas heeded his advice and moved to the Maharashtra capital to pursue his passion. Once in Mumbai, he became a better player, competing against the best in business.

Suhas, a close-to-the-table player, used pimpled rubbers on both sides. His good ball-control enabled him to keep the ball on the table.  He was equally accurate in smashes.

This is what endeared him to his contemporaries. As chief national coach Manjit Singh Dua aptly put it, Suhas was a thorough gentleman. “I have played against him and admired his abilities and skills. He was very active even after quitting serious play,” said Manjit.

The left-handed Suhas, employed with the Bank of India, was a popular figure in his heydays. He became a Junior National champion and won every other title, including doubles and mixed doubles, on offer. But never the men’s singles! Suhas could never figure out how it eluded him. He must have carried that regret to his grave.