Sathiyan and Sutirtha in the zone, book Tokyo tickets 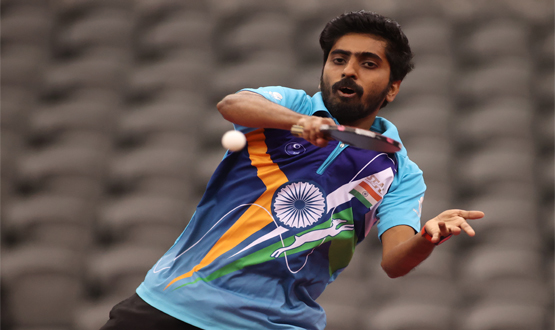 New Delhi, March 19: It was a disappointing show for Manika Batra as she went down to compatriot and the second-highest ranked Indian, Sutirtha Mukherjee, 2-4 in the women’s singles of the Asian Olympic Games Qualification Tournament in Doha last evening.

Taking on Sutirtha in the South Asia final, Manika began well but failed to build upon the initial lead as Mukherjee emerged the surprise winner across six games 7-11, 11-7, 11-4, 4-11, 11-5, 11-4. The victory reserved Sutirtha’s Tokyo berth even as Manika, who will eventually get there, awaits confirmation of her berth, based on her world rankings.

In the fourth game, the 2018 Commonwealth Games gold medal winner in the women’s singles came back strongly to level the score. But Manika was never in the right frame and failed to strike rhythm. So much so, she managed only five points in the next to help Sutirtha go 3-2 up. In the sixth, the former national champion took seven points on the trot to emerge a deserving winner in less than 35 minutes.

Sharath, who finished behind Sathiyan in the South Asia section, will be the second male player at the Tokyo Games because of his world rankings. He, however, will have to wait for the International Table Tennis Federation’s reconfirmation in April.

Sharath and Manika capitalized on the second match-point to beat the Singaporean pair of Pang Yew En Koen and Lin Ye 12-10, 9-11, 11-5, 5-11, 11-8, 13-11 to enter the final of the mixed doubles event today. In the final to be played tomorrow, the Indians will clash with South Korea’s Lee Sangsu and Jeon Jihee, who defeated Padasak Tanviriyavechakul and Suthasini Sawettabutt of Thailand 4-2.

It was a very tricky affair in the sixth game for the Indians, who opened well only to trail by four points at one stage. However, they overcame the deficit to level the score and then deuce, for their first match-point. The Singaporean duo saved the first but not the second, paving the way for the second-seeded Indian pair to move into the final. The pair that wins the final tomorrow qualifies for the Games.

Earlier, the Indians conceded seven points, the greatest lead to their rivals, and came back strong in the fifth to give them a glimmer of hope. The Indians cashed in on the 4-2 lead to seal their opponents' fate in the sixth.

Sathiyan on verge of booking his Tokyo ticket

New Delhi, March 18: Sathiyan Gnanasekaran has, more or less, booked his Tokyo berth when he crossed the biggest hurdle, beating compatriot A. Sharath Kamal 4-3 in a nail-biting opening encounter at the Asian Olympic Qualification Tournament in Doha today.

The triumph against Sharath put him at the doorstep of the Tokyo Olympics as he needed to post a win over the only other South Asian rival, Mohammad Rameeze from Pakistan, in a late match tonight.

Sharath had a starting trouble. He came into his own only after losing the second game on extended points, taking the next three games. In the end, just three points separated them—Sathiyan won 73 to Sharath’s 70—in the overall analysis, putting the former in an unenviable position.

Sharath had his chances in the second and sixth games, coming too close for Sathiyan’s comfort, but he frittered them away. Nevertheless, Sharath should get on the plane to Tokyo based on his world ranking after all the continental qualification events get over.

Meanwhile, the top-ranked Indian in the world at 32 entered the semi-finals of the mixed doubles events. Combining with Manika Batra, the pair defeated Qatar’s Mohammed Abdulwahhab and Maha Faramarzi 11-6, 11-6, 11-2, 11-3 in less than 21 minutes.

Later tonight, the two Indians—Manika and Sutirtha Mukherjee—will engage in a battle royale to reserve the lone women’s singles spot from South Asia. If Sutirtha manages to win and book her Tokyo ticket, it will be an advantage for India. Manika, the world No. 63, can still hope to qualify based on her world rankings.

Players from East Asia, Middle Asia, South Asia, and Southeast Asia are contesting in the Asian Singles Qualification, being held at Doha, for a place each in the men’s singles and women’s singles, apart from the lone mixed doubles spot. Except for South Asia, players from the other three regions will play in two stages, including the knockout round.

West Asia held its qualification event at Amman (Jordan) last year. Saudi Arabia’s Ali Alkhadrawi in men’s singles and 11-year-old Syrian, Zaza Hend had booked their Tokyo berths. Zaza was the youngest, at that time, to qualify for the Games!