Sharath falters yet again in PQF 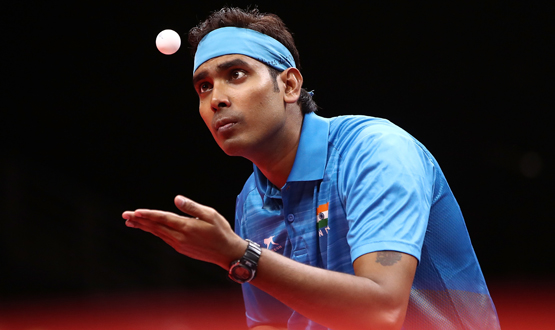 Indore, March9: A. Sharath Kamal entered the men’s singles pre-quarterfinals of the WTT Star Contenders at Doha when he defeated Patrick Franziska of Germany 12-10, 3-11, 11-7, 7-11, 11-9 in a tough match that went the full distance.

For the second time, the Indian has managed to enter the Round of 16. In the WTT Contender event last week, Sharath could not go past Lin Yun-Ju in the pre-quarters as the Taipei paddler won 3-0

Sharath, ranked 32 in the world, began well to take the first game against world No. 16. But the German was quick enough to restore parity. The next two games followed the same pattern as they sparred well to take the issue to the decider. In the fifth game, it went neck and neck but the Indian clinched the last two points to push out the German.

Sharath will next meet another German, Dimitrij Ovtcharov, in the pre-quarterfinals. Dimitrij was the eventual title-winner of the WTT Contender a few days ago.

Manika Batra failed to qualify for the main draw in the WTT Contender championships the other evening. Today, however, in the Star Contenders she won the first round in the main draw when she downed Taipei’s Cheng Hsien-Zu 3-0 before going down 7-11, 6-11, 7-11 without a fight to top-seed Japanese Mima Ito. Incidentally, the Japanese claimed the title in the previous event.

Sharath falters yet again in PQF

Indore, March 10: A. Sharath Kamal faltered once again in the pre-quarterfinals of the WTT Star Contenders in Doha when he went down in straight games to world No. 12 Dmitrij Ovtcharov. The German won 11-9, 11-8, 11-6.

Sharath showed consistency in the first game against the German, who recently won the WTT Contenders title, and came close. But he could never get under the skin of a man who was in superb form.

After losing the first game so narrowly, Sharath looked good again the second but could not overcome the blues. In the end, the third game was so easy for the German that he didn’t need to make any extra effort to complete the task. He will take on Swede Anton Kallberg in the quarterfinals tomorrow.

With the exit of Sharath, the Indian campaign in the WTT events came to an end.