Harmeet, the most popular paddler in the state, didn’t disappoint his fans as he demolished his Haryana rival with clinical precision. Throughout the Games, the Birm

Sharath pulls out with back spasm; Sathiyan, Harmeet advance

But for the second-seeded A. Sharath Kamal, who made India proud with three gold and a silver at the Birmingham Commonwealth Games, it would be the Games he woul

Sanil and Soumyajit struggle, but stave off threats


Surat, Sept 22: No. 1 and No. 2 seeds from Tamil Nadu, G. Sathiyan and A. Sharath Kamal, toyed with their respective opponents scoring an identical 4-0 wins to move into the pre-quarterfinals of the men’s singles in the 36th National Games at the Pt. Deendayal Upadhyaya Indoor Stadium here today.

But third-seed Sanil Shetty from Maharashtra had to endure UP’s Divyansh Srivastava in his Round of 32 matches, eventu


Surat, Sept 22: In the mixed doubles event that set the ball rolling on the third day of the 36th National Games competition at the Pt. Deendayal Upadhyaya Indoor Stadium here today, only three seeded pairs survived to enter the quarterfinals.

In the women’s doubles, however, Sreeja Akula and Nikhat Banu, the fourth-seeds from Telangana, went out while the other seeds made their quarterfinal entry without hiccups. Sree 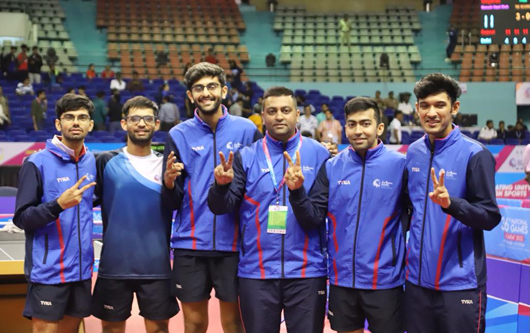 Surat, Sept 21: Gujarat and West Bengal had to wait seven years for the National Games titles, after having finished runners-up at the Kerala Games held way back in 2015. And the wait was worth the weight in gold.

On Wednesday, Gujarat defeated Delhi 3-0 and West Bengal toppled Maharashtra 3-1 for the crown. However, West Benga had some anxious moments before crossing the line. Delhi and Maharashtra return home with silver.