A cozy prelude before the tough Nationals


Indore, May 22: The unfinished Central Zone events in Under-11, 13, and 15 categories, but for the forced postponement in January because of the spike in Covid cases, would have been as crucial for the fringe boys and girls as it was during the National Ranking championships held at Dehradun to stake their claims in the 83rd Cadet and Sub-Junior National Championships that gets underway in four days.

The remaining events of the Central Zone championship

You are invited to join the draw proceedings, via the Zoom link provided here under. 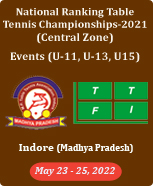 You are aware that some of the events in the last Central Zone championships could not be completed due the threat of the pandemic. Since the situation has improved,  It has been decided to conduct the U11, U 13 and U 15 events as follows.  Please note that no additional entries are allowed for these events.  Only those who have already entered can participate in these events

Rounding off the season on a winning note, Ankur beat K.J. Akash of Karnataka 4-1 for his second title. His authority was never in doubt, a

Incidentally, it was his second title-winning effort this season.

In the women’s singles final, fifth-seed Diya Chitale outsmarted second-seed Reeth Rishya in a match that witnessed excellent rallies and an