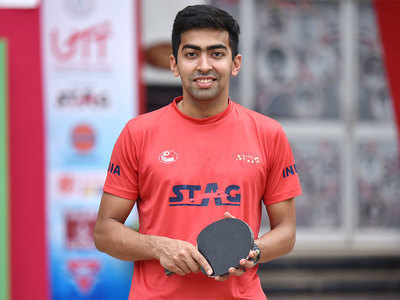 He had to wait seven-long years after he had reached his first final in 2013. Harmeet pocketed Rs. 2.5 lakh for his fantastic efforts, while Haryana’s Sutirtha Mukherjee claimed her second National crown—she won her first


Hyderabad, February 1: There were some similarities to Soumyajit Ghosh and Ankita Das, both trying to find their feet in the mainstream of table tennis after a hiatus.

Both had qualified for the 2012 London Games and both are from Siliguri. Other than that, what endeared then was that the two former stars found themselves in the thick of action with all eyes fixed on them. They did not disappoint as they reached the semifinals of the men’s and women’s


Hyderabad, January 31: Archana Kamath became the first victim as the fifth seed went down without a fight to qualifier Manushree Patil of Maharashtra 3-11, 8-11, 7-11, 4-11 in women singles of the UTT 81st National Table Tennis Championships at the Saroonagar Indoor Stadium here today.

It was a disappointing end to the reigning national champion who was expected to defend the title she won at the Cuttack Nationals last year.


Hyderabad, January 30: Petroleum Sports Promotion Board (PSPB), as expected, beat Delhi 3-0 to lift the men’s team trophy for the 24th occasion, while the Railways women defeated Bengal ‘A’ 3-0 to wear the crown in the UTT 81st National Table Tennis Championships at the Saroonagar Indoor Stadium here today.


Hyderabad, January 28: Delhi had to toil for 37 years to enter the final but the wait was worth all its trouble as their men paddlers blanked out Gujarat 3-0 to achieve the results in the UTT 81st National Table Tennis Championships at the Saroonagar Indoor Stadium here today.

They will take on Petroleum Sports Promotion Board (PSPB), who thrashed Telangana 3-0, in the all-important final tomorrow. But the biggest shock was in store for PSPB women as Railways Sport