Jammu, December 3: It won’t be a cakewalk for both Maharashtra A and Uttar Pradesh, the top two seeds, as they are expected to meet some of the hot contenders in each of their halves during the second stage in the 81st UTT Junior and Youth Nationals at the Indoor Hall of the M.A. Stadium here today.

Maharashtra girls, the title holders, placed in the top half can have a smooth passage up to the semi-final but could run into a rough weather if they happen to clash


Jammu, December 2: Haryana and Tamil Nadu’s Junior Girls had to wage real tough battles against Maharashtra B and Bengal to ensure themselves top slots in their respective groups in the 81st UTT Junior and Youth Nationals at the Indoor Hall of the M.A. Stadium here today.

After having won the first round match 3-0 against Himachal Pradesh in Group E, Haryana fought well to beat Maharashtra B 3-2, as the latter led 2-1 after the crucial doubles. But it was Suhana S


Jammu, December 1: The 81st UTT Junior and Youth Nationals getting underway from tomorrow at the newly-constructed M.A. Stadium guarantees an interesting as well as intense fight among teams for superiority to get to the top of the medal podium in all the four sections.

Unlike in the last edition, where the Junior Boys and Junior Girls of Delhi and Maharashtra were runaway winners, this year they will have to really wage a bigger and smarter battle with 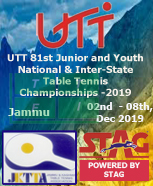