Jaipur, February 18: Rahul Chopra of Delhi bagged his maiden Men Singles gold in 40+ category after beating Vikas Mahajan of Punjab 10-12, 11-7, 7-11, 18-16, 11-6 in what proved to be the toughest final in the 25th Veterans National Table Tennis Championships at the SMS Indoor Stadium here today.

Of the other three titles decided, one went the way of Nirmala Abhyankar of Telangana who accounted


Jaipur, February 16: As many as 15 players from Maharashtra qualified in Men singles 40+ category today to enter the second stage, which is the main draw, that gets underway from tomorrow in the 25th Veterans National Table Tennis Championships at the SMS Indoor Stadium here.

The Men 40+ draw, which will be of 64 players, also saw Gujarat having eight of its paddlers making the cut while Del

And the triumph somewhat made up for the two team trophies which their women lost earlier in the day. In Men 50+, Delhi avenged last year’s loss to down Maharashtra A 3-1. 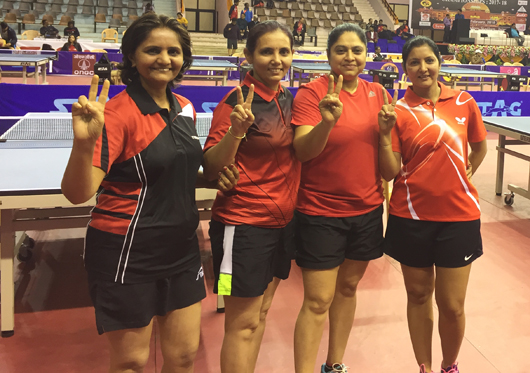